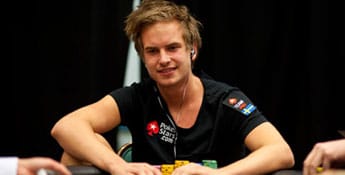 Viktor Blom Net Worth: It’s becoming more common for poker players to appear on the scene and grab people’s attention for both good and bad reasons. Some personalities are loud and obnoxious, others more mysterious. This is where Viktor Blom fits in: best known by his online username ‘Isildur1’. Blom came onto the scene out of nowhere in 2009. Here’s his story.

Born in Gothenburg, Sweden, on September 26th, 1990, Viktor Blom started playing poker at the tender age of 14 years old. He and a group of his closest friends would often play friendly home games against each other. Apparently inspired by the Chris Moneymaker “poker boom” that happened in 2003, Blom soon realized he had a real knack for the game.

By all reports, it was Blom’s brother who helped him take his first tentative steps into the world of online poker. His brother created an account on PokerParty.com, which enabled Viktor to practice under the username of Blom90.

However, he soon dropped out of this site so that he could play and practice for 15 hours a day. This lead to him joining the Full Title Poker site when he was 18 with the now-legendary username Isildur1 and playing $.50/$1 NLHE online.

It didn’t take Blom long to realize that his ultra-aggressive style caused real trouble for his opponents after he managed to win $2 million in a few weeks using a deposit of $2000. This happened in 2008 and turned out to be his big break.

Despite battling such online heavy hitters as Phil Ivey and Patrik Antonius, it was Blom’s 2009 matches against Tom ‘durrr’ Dwan that grabbed people’s attention. By November that year, the still-unknown Blom (playing as Isildur1) had made almost $6,000,000 on Full Title Poker, with the majority of his winnings coming from the pocket of Dwan. Isildur1 was almost solely responsible for Dwan’s devastating loss of $8,000,000 that year, so much so that Dwan (who would eventually rebound) refused to play any more games against the enigmatic and reckless Isildur1.

Blom’s reputation as an unpredictable and foolhardy player came into sharp focus once he started playing multiple tables at the same time, something considered insane by most other players.

November 2009 also saw Blom play simultaneous games against Phil Ivey and Antonious, which lead to Blom lose $3,000,000 and Antonius winning a record-breaking $1,356,946.50. Blom soon lost a further $4.2 million against Brian Hastings, which seemed to spell the end for the prodigious Swedish player.

However, in 2010, PokerStars offered him sponsorship, allowing the 21-year-old to continue playing poker. This lead to Blom appearing in person at a real-life venue named Superstar Showdown in 2010 so that, finally, his identity became public. This didn’t seem to faze Blom, though, as he went on to win $1.25 million in the $100,000 Super High Roller at a 2011 live event known as PokerStars Caribbean Adventure.

Adding to Blom’s mysterious nature, his poker appearances have been sporadic, to say the least. Throughout 2013 and 2017, he won one World Championship of Online Poker title and four Spring Championship of Online Poker titles. As he steadily moved over from online to live play (moving between Sweden and the United Kingdom), his total live tournament cash is believed to be as high as $3,000,000.

Two of his most recent big professional wins include the 2018 PartyPoker Million Germany live event against Pavel Plesuv (with an astonishing $1,054,000) and in 2019 with $5,424 (after he came 2nd in the World Series of Poker Europe event).

Viktor Blom’s Achievements at a glance

Due to Blom’s disinterest in publicity and penchant for playing online under different names, it isn’t straightforward to gauge his exact net worth from poker winnings. What also has to be taken into account is that Blom’s poker technique very much involves losing huge sums about as often as he wins big, meaning his net worth fluctuates wildly between 0 and millions.

Blom is said to be quiet and unassuming in person, the inverse of his brash playing style. After moving to London around 2010, he was said to have hired a personal assistant so that he could focus on playing and practicing poker.

One famous story concerns Blom at a £100,000-entry event in London, at which he wore a black shirt covered in thousands of small skulls. When Blom was asked about his shirt, someone else at the table said each skull represented every opponent Blom had defeated. Blom deflected the good-natured laughter with a polite smile as a way of dealing with his fearsome reputation.

However, his “play anyone” mentality wasn’t the only thing that sometimes got him noticed. The Swedish newspaper Dagens Industri claimed, in 2012, that Blom owed tax in Sweden to the tune of $150 million. Although subsequent reports are thin on the ground, so it’s entirely possible this case came to nothing, or Blom reached a private agreement.

From all accounts, he lives back in Sweden in an undisclosed town and, although he doesn’t avoid interviews, his sense of privacy makes grabbing him for a chat tricky. In an interview for pokerlistings.com in 2017, he stated that all he knew about poker in ten years’ time is that he’d still be playing it.

Most recently, Blom has been linked with a new poker app, Pokio, which includes a section overseen by Blom: Isildur1’s Game. Players can hone their skills against him, with a chance to compete in the 2020 World Series of Poker Main Event.

Viktor Blom made a name for himself at a surprisingly young age for a poker player. Perhaps this added to his trademark playing style of reckless betting, or maybe that’s how he prefers to play. As the only player who can lose huge sums just as quickly as winning them, Blom always guarantees an exciting match. What the future holds is unknown, but one thing is for sure: Blom will continue as one of the most entertaining if enigmatic players in poker today.