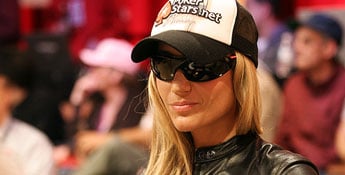 Vanessa Rousso Net Worth: Success relies on many factors. Some people need their looks while some believe in their skills. In Vanessa Rousso’s case, she seems to have a firm grip on both. Within a short span of her poker career, Vanessa has managed to rack up millions of dollars in winnings. Her achievements earned her a spot in the five best female players. Her net worth also landed her on the list of top poker players of all time.

Vanessa has reinforced the old saying that you should never judge a book by its cover. In poker, you could interpret that as never getting distracted by a pretty face. Otherwise, your face after losing all your chips wouldn’t be at all pretty. How did Rousso become such an idol in the poker industry? What makes her stand out from the rest?

Read on to find out more about this amazing poker star and what makes up Vanessa Rousso’s net worth.

Vanessa Rousso was born on February 5th, 1983, in White Plains, New York. Her father was born and raised in Paris. When she turned three, he moved the family back to his hometown as he wanted to raise her where he grew up.

Vanessa ended up going to school there until she was nine when her parents divorced. This resulted in her moving back to America and continuing her education there. Also, because of this, Rousso is fluent in both French and English.

Having two other sisters who are dedicated athletes, Vanessa grew up in a competitive environment. She played many sports with her siblings, including basketball, softball, swimming, and lacrosse.

Despite her athleticism, Vanessa has always had a certain inclination towards cognitive maneuvers. She excelled in debate and had topped many policy debate tournaments and events.

It doesn’t stop there – Vanessa also had astounding academic accomplishments. She had been one of the few students who kept up a 4.0 GPA in all four years of high school. Valedictorian, National Honor Society, you name it. The only question remained, what doesn’t this beautiful genius do?

Vanessa’s poker career started online during her high school years. She saved her winnings until she was old enough to compete in live tournaments. By then, she had accumulated a decent bankroll. The 2005 WSOP Circuit Event was Vanessa’s first tourney. She managed to place 7th and took home over 6,000 dollars. She then used some of it to enter and win the Palms Summer Series Hold ‘em event in the same year. That was the start of the process that made Vanessa Rousso’s net worth as substantial as it is today.

During her years at Duke University, Vanessa spent the better part of her days studying Game Theory. It was how she conceptualized her poker strategies. Having a good grasp of Game Theory allows you to make better decisions both in life and poker.

Vanessa has always relied on her knowledge in this concept to dominate the table. In fact, it was due to her passion for the felt that she’d put her law studies on hold. It’s also important to mention that she finished her bachelor’s degree in two and a half years.

Vanessa’s streak took a turn for the better in 2006 when she made the final table at the WSOP Circuit Event. The buy-in was $1,500, and she snatched a healthy prize of $17,550. This was a milestone for Vanessa as she became the youngest female player to make the WSOP finals.

She then went on a frenzy in the same year, cashing on eight more tournaments. One notable event was when she placed 7th in the Five Star WPT for over $260,000. Who needs a law degree when you make more than the District Attorney?

She ended up winning her first WPT ever in September of 2006 at the Borgata Open for more than $285,000. Vanessa took the victory with grace and saw it as another bar she needed to jump over. And jump, she did. In 2007, she took the second place at the Pokerstar Online World Championship and won over $700,000.

This meant the world to Vanessa as it was more than all her previous wins combined. Her success led to sponsorship by Pokerstars. She began playing on the Pokerstar team as LadyMaverick until 2015.

In 2009, Vanessa achieved her biggest victory ever. It was at the European High Roller Championship, where she took home over $960,000.

Vanessa Rousso Achievements at a Glance

Over the years, Vanessa has accumulated over 4 million dollars in tournament earnings. The figures don’t even account for her online action and cash games. This number does include the $700,000 she won on the Pokerstar Online Championship.

Vanessa had to take a break from the tournament life to finish her law degree, so her income subsided somewhat. That doesn’t mean you won’t see her pop up in the occasional cash games. She hasn’t earned any official income as an attorney as of yet.

Rousso has participated in many cash game events of various stakes. Usually, one of the highest stakes ($10,000 and above). She’s shown up to a few games of the $100,000 buy-in Pokerstars Big Game series. Imagine having to take out two mortgages to even sit down at this insane table!

One of Vanessa’s fan-favorite hands were in these games. She was heads-up against Tony G, one of the most annoying players known to man. The guy talks so much, it’s embarrassing. His unending chitchat was no match for Vanessa’s focus, though.

She ended up crushing him with a boat full of Aces on the river. What’s funny is that Tony G was setting a trap for Vanessa with his smaller boat only to stack himself at the end. Vanessa Rousso’s net worth is approximately $4 million, which is quite outstanding.

As if you hadn’t already noticed, Vanessa Rousso is a lady of many talents. When she’s not beating men at the poker table, she gives them beats to dance to. That’s right, besides her uncanny math skills, Vanessa’s also a professional D.J. While she doesn’t have any #1 album or the like, it shows how diverse her character is.

Vanessa found love not too far from the felt. She met Chad Brown, another professional poker player, at one of the World Series events. The two fell for each other fast and have been together since. She married him, and they lived together until 2012. Her husband also did well in his poker career, having won over a million dollars.

If all that isn’t enough, Vanessa Rousso has also modeled for Sports Illustrated amid her poker peak. Bleacher Report ranked her as the 18th sexiest poker player in the world in 2010. Those who don’t recognize her as a poker pro might have seen her on the 2015 Season of Big Brother.

Conclusion: More Than a Poker Star

Vanessa Rousso is, by far, one of the most diverse players in the poker industry. She has shattered the typical association between poker and the lack of physicality. Not too many players today have managed to make their names in such a short time. There has been frequent discussion about her announcement to leave the game.

Indeed, Vanessa won’t be showing up to the WSOP for a while. Her time isn’t over yet, though. She’s still very much in the run. Expect to see her on random televised cash games. Keep an eye out as she might pop up out of nowhere.